"The election might make you cry...so, why not laugh a little?"

I just LOVE The Second City, I mean it is a total institution yes, but the way they keep things current and fresh and FUNNY. Every time they come to town or, when you are traveling and you see they are in that town, you must go and see them, period.

Free Speech (While Supplies Last) indeed honors the show tittle, filled with political references and direct jabs at the current U.S election. Standing on the Democrat side, they explain to the audience the reasoning behind their choice and, the reasoning why everybody should go with that choice. I think it is absolutely hilarious and brilliant. It is the 21st century and things need to be told as they are without any 'political correctness' or 'euphemisms', -for reals- SPECIALLY in this historic moment when the United States has a black president and, is about to have a woman president. Ok, ok on to the show...

Obviously, each of them has their own style and flavor. In the first part, Julia (who I consider looks better as a blonde) introduces herself as God and expresses that she kinda is over it. She talks to the audience and has a very good handle of the 'unexpected'. It always depends if the audience member is going to give you game or not and, if -not- is the case, how to turn that around. Weiss masterfully turned the situation in the performance that I was in, with a semi rude man (claiming to be Republican) that responded 'what is this an interview?' when Julia was asking him about what his hobbies were and so on. With grace she responded "ok I will talk about what I like", and took the bit from there. Perfectly played.
Carley great with creating stories on the spot, Emily is a delicious cynic that you cannot get enough of. Jeffrey Murdoch is funny, cute and I consider rounds out the troupe in the magnificent comedic harmony they create. Scott -ADORABLE- I was under the impression that he was the perfectionist of the group. (my personal opinion off course) And Chucho. Is he really 45? well, if that is true, he proves the 'brown don't frown' saying. In order to understand what I am talking about, you have to see the show that is currently playing until Sunday August 21st. 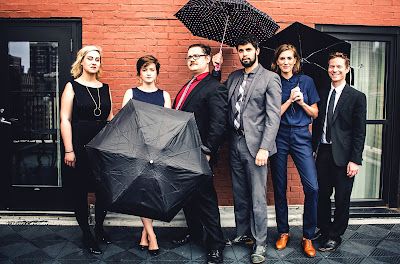 Tickets range between 32 and 44 dollars, with special military discounts.
Surrounding activities might encourage you and help you choose which day to go in:

Theatergoers are invited to attend Foodie Fridays, where a ticket to select Playhouse performances also includes access to some of San Diego’s finest food trucks!

Enjoy live music before the show. More details to follow.