My interview with the Dashwood's

Two sisters, their fathers death, their fortune lost. The beloved Jane Austen novel, Sense and Sensibility has been re imagined into a romantic musical production created by Tony Award Nominee, Paul Gordon.


The awaited West Coast Premiere took place last Thursday at The Donald and Darlene Shiley Stage, Old Globe Theatre. Who better to discuss all the process than the two leading ladies, the Dashwood sisters: Megan McGinnis who plays Marianne and Sharon Rietkerk who plays Elinor. Also, they originated the roles for the Chicago Shakespeare Theater world premiere.

"I am a big Jane Austen fan and have read all
of her novels"
The first thing that came to mind -obviously- after the awaited Chicago world premiere, is if there were any changes for the West Coast premiere in San Diego. "A musical is an ever evolving process" Explained Sharon during our interview. "We have one brand new song and we put in a new ending for Elinor and the character Edward (played by Wayne Alan Wilcox). It is a big change. It is fun to be a part of a process that continues to grow and, learn from past experiences and try to improve the story that we are telling now".

Part of that growth involved making things clearer, more emotionally impact-full and giving the characters stronger voices. I also thought of the strong fan base the 1995 film version has. Made me bring up the 'comparison' factor. How people would react one versus the other. "Emma Thompson is so incredible in the role of Elinor that, I did not want to have her voice in my head. I wanted to be able to create my own version. I have only myself to work with. I think it is fascinating to watch this musical. It is not a play or a movie. When the characters break into song, you get to see their deepest thoughts".

With this, Rietkerk went further elaborating that Elinor is a very reserved person. Having the chance to sing, it allows her to share with the audience feelings that she otherwise, would have kept secret. It is a classic tale with the addition of song. "What we focus in the adaptation of this novel is the love between Marianne and Elinor; and, the beauty of two strong women, caring and supporting each other when they are going through difficult times".

The San Francisco based actress is very happy to be performing in San Diego (plus the weather is not bad either). She feels both men and women can connect to this story of friendship, romance and honor. She also considers the set and the lighting s-t-u-n-n-i-n-g. Props Kevin Depinet and Donald Holder!

That, is the impression of her co (sister) star. Why does she consider her voice, one of angels?

"She simply is spectacular. The voice is clear and she is an affecting storyteller. It is such a joy to be able to perform it every night. I think the audience can really feel it. It is a really beautiful show and I hope that everybody comes".

Surprisingly, McGinnis has been involved with this creative process even before the Chicago chapter started.
You see, Paul Gordon is also the lyricist of the musical Daddy Long Legs. Musical Megan has been a part of, for the last seven years. In December of 2013, she was also doing another 'Gordon' musical called Little Miss Scrooge. In her words "Clearly we love to collaborate.

Paul cannot write a bad song".
These talented ladies are doing eight shows a week. What is the discipline you have to endure in order to take upon such a task and in another city that is not your own? "It is tough! There is quite a bit of singing and quit a bit of emotional range. And, I find that, the most tiring. You have to go in at 100% and it takes its toll no matter what you do. Thankfully we end on a happy note, so that is rejuvenating. Rest is the number one thing and drinking a lot of water".


"If I have the voice of an angel"...
"Um she does too!" responded Megan. "We blend together so well, it is so easy for us. We come together like one and we are super lucky that we found that".

Well you know, they played sisters in another show so, they know what's up. And, when 'Menguin' as her husband and cousins call her, was in readings/auditions for Sense and Sensibility, she immediately mentioned her onstage sis to play Elinor. "I am lucky to have her. it is really an exceptional cast across the board".
She urges everybody to come and see the show because -they will LOVE it-.
Celebrating her 20th anniversary living in New York city, Megan moved to the Big Apple to be on Broadway. Being a TV alumni when based in Los Angeles, having roles in Blossom and Sister Sister to mention a few, she is focused now in her onstage career and awaits the right time for the cameras. 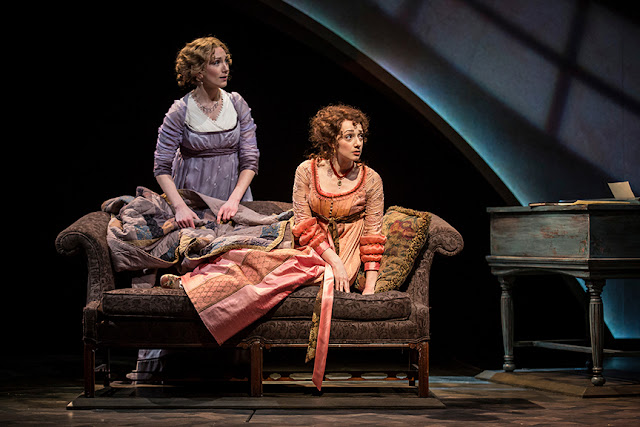 AND, for Miss Rietkerk there is a website as well: sharonrietkerk.com

Sense and Sensibility is currently playing until Sunday August 14th. Tickets can be purchased online at www.TheOldGlobe.org, by phone at (619) 234-5623, or by visiting the Box Office at 1363 Old Globe Way in Balboa Park.
en Monday, July 18, 2016
Email ThisBlogThis!Share to TwitterShare to FacebookShare to Pinterest
Etiquetas: Culture, english, MusicalTheatre, Old Globe, SanDiego